Auckland provides cruise ships with an amazing docking spot right in town. Cruise ships can either dock at the Queens Wharf or at the Princess Wharf. Both are located right next to each other on the famous Auckland waterfront and in front of the downtown area.
You will simply find the city center of Auckland across the street from the Auckland cruise terminal. 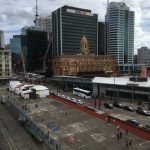 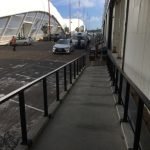 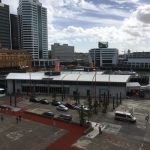 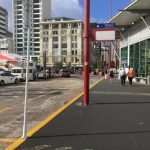 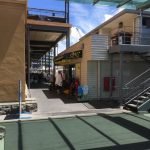 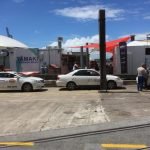 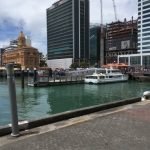 Ferries next to the cruise dock 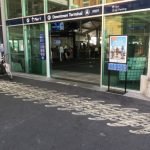 Tourist information at the cruise dock

The Auckland cruise dock is close to a great transportation hub in the city.

One of the cities mayor bus stop is situated around 2 blocks away from the ship. This is called Britomart. There is also a bus stop right at the cruise dock. This is bus stop 7300, ferry terminal, Downtown D4.
The whole city is well connected by an extensive bus service. To travel on the bus simply pay the driver NZ$ 5,50.
The Link bus routes are excellent bus routes to take a around. They loop around the city and they come by every 8 to 15 minutes.
The red line is the city link which circles Wynyard Quarter – Queen street, and K road
The green line is the inner link which connects Ponsonby, Grafton, Newmarket, Parnell and the city center.
The orange line is the out link which connects Herne Bay, Pt Chevalier, St. Lukes, Mt Eden, Newmarket, Parnell and city center.
More information on this can be found on at.govt.nz/link

The Auckland cruise dock is about 1 block away from the Britomart Transport Centre, which is Auckland’s major transportation hub. You can connect to all kinds of trains an busses going into every direction.

You will find the ferry terminal right next to the cruise terminal. You can simply take the ferry across to various parts of the city like the North Shore, Hauraki Gulf and islands. You can buy your tickets at the station either at the counter or at the machine. The machine will only take credit card.

These destinations are perfect if you have already visited Auckland before and just want to venture out for the day. Because of the convenient location of the cruise and ferry terminal being next to each other you will have no problem getting out for they day.

There will be taxis waiting for you at the Auckland cruise dock. Official taxis don’t have a specific size or color, but you will recognise them by the taxi sign they have their roof. Taxi’s in Auckland have a meter which is great for short distance rides.
You can also ask them to drive you around for a couple of hours. Please know that this can be quit expensive as the rule of thumb is that is cost around $160 per hour.

Auckland Hop on hop off bus

The city of Auckland offers hop on hop off bus tours. Find the main stop at Quay Street in front of the cruise terminal. Buy a day pas an cruise around on one of the open top, double decker busses.

If you simply cant get enough of cruising you might want to know that there are also 90 minute harbour cruises available near the ferry station. This will give you a tour around the port and you’ll get to see the city’s most famous landmarks from the water.

You can grab a bike a the Queens Wharf or Karanga Plaza. Bikes here are free to use for the first 2 hours. There is also an e-bike rental service at the ferry terminal in front of the Queens Wharf cruise dock.

Auckland is known for its bicycles routes. You will find many suggested bicycle maps all over town and also in the near area of the cruise terminal.
The city is fairly flat and the road offer many biking lanes and all that. If you are looking into doing something active this might just be the thing to do.

From Auckland airport to cruise port

Getting from the Airport to the Auckland cruise terminal will you approximately 30 to 45 minutes. You can either grap a taxi or the SkyBus to the airport.
A taxi from the cruise terminal to the airport will cost you between 75 and 90 NZ$. The shuttle bus service is most often around 20 NS$ per person (one-way).

The Skybus runs a couple time per hour during peak hours. You can buy your ticket directly on the bus.

Wi-fi at the cruise terminal

The cruise terminal provides a free wi-fi connection for you to use. You will also notice the city has several wi-fi hotspots where you can connect to the internet as well.
Alternatively a lot of bars and restaurants provide a complimentary connection if you use their facilities.